The project eidolon, immagine (2015), has been intended as a commentary of the portraying gesture and it aims question its role within society. Representation through images has resulted to be central in our life, mostly in the process of construction meaning. Due to the necessity to give sense to the world, the human being has represented, shaped and depicted the surroundings; he has introduced sculptures and he has realized material images of himself, of the world around and of other creatures. He has created and imitated a second nature, capable to provide him with experience and knowledge. He has then charged the images with meaning, acting God-like in conducing this procedure. However, the Holy Bible clearly states that God is the only one capable of creating living images and it reminds on the consequences coming from the irrational devotion and worship toward the products of our hands. This prohibition not only refers to the fabrication of a sculptured copy of a men or of a woman, but it is extended to the representation of ‘anything in heaven above or on the earth beneath or in the waters below.’(Exodus 20:4).

Starting from this assumptions, I wanted to investigate through this body of work, on the existence of a circular nature in the relationship between God and the human being, where the human is at the same time sculpted material and modelling agent, subject creator and created object.The project has been realized using as main source, illustrated archival texts coming from different studies and disciplines, from comparative anthropology to the history of art. Removed from their original context, the selected images and captions they have been organized and rearranged under the form of an art book composed by 24 plates following the structure of the biblical quote from Exodus 20:4.The artwork aims to reframe the very notion of the portrait, extending its definition to any action of creation or imitation undertaken by men in the attempt to signify the world they live in, as well as, it poses at the centre of its reflection the possibility that images ultimately become sources of autonomous meaning. 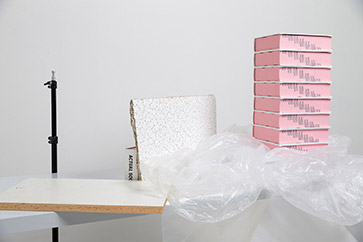